Economic growth and earnings data remained robust during Q3, and this ultimately overshadowed simmering concerns around the escalating US-China trade war. The US initially targeted $34 billion of Chinese products with a 25% tariff in early July, while monetary policy tightened in the US. Markets were mostly positive in developed countries, but there was significant volatility in some emerging markets. Commodities struggled against a strengthening US dollar, while energy continued to rise with the prospect of sanctions on Iran.

In the US, ongoing growth and strong employment figures allowed the Federal Reserve to increase the federal funds rate by 25 basis points. The committee also dropped its long-standing description of monetary policy as “accommodative”, reaffirming an outlook for ongoing hikes in 2019. Data released in September showed wages to be growing at the fastest rate since 2009, while industrial activity indicators show little impact from the trade wars. 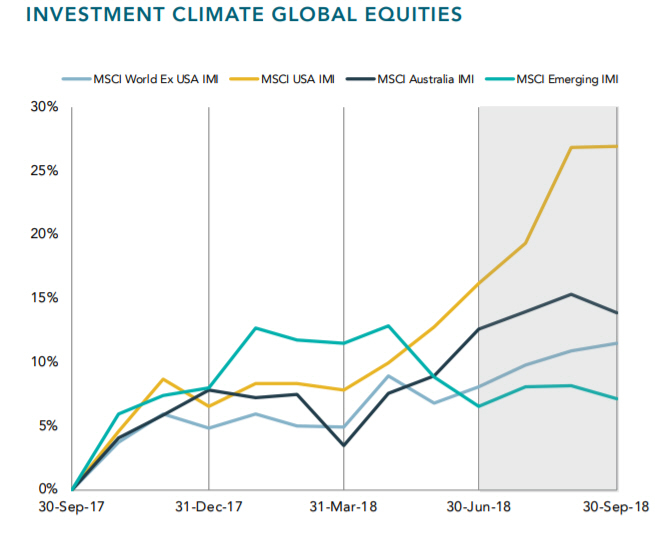 In the EU, fears over trade impact on Europe were calmed following a meeting in July between US President Trump and EU President Juncker. From this came an agreement to work towards zero tariffs on non-auto industrial goods, while new car tariffs were put on hold. Growth for the second quarter was revised up to 0.4% quarter-on-quarter, compared to the initial estimate of 0.3%.

In the UK fears for the economy were reflected in the value of the pound, which resumed its downward trajectory over the period. However, the outlook for the domestic economy improved, as growth recovered from the slow first quarter, prompting the Bank of England (BoE) to increase interest rates by 25 basis points.

In Asia, Japanese company profits continued to improve. Economic growth rebounded strongly from the short-term weakness seen in Q1 and corporate sentiment remained relatively firm given the tightness in the labour market and the uncertain global outlook. Meanwhile, Chinese macroeconomic data disappointed as they retaliated against US trade tariffs. Authorities announced a range of targeted economic support measures, including fiscal stimulus and credit easing. The central bank also re-introduced macro prudential measures to stabilise the renminbi.

In Australia, it was much the same as Q2, as the Reserve Bank continued to hold the cash rate, while house prices continued to fall as tighten lending conditions influenced mortgage lending and real estate, particularly in Sydney.

The following outlines the returns across the various asset classes to the 30th September 2018.

Eurozone equity gains were modest with the MSCI EMU index returning 0.4%. Energy and industrials were the leaders. Financials made a good contribution despite weakness in the banking sector amid concerns over exposure to emerging markets as well as worries over the Italian budget.

The UK’s FTSE All-Share fell 0.8% over the period. The Bank of England increased base rates and sterling fell in response to political noise around Brexit. Any slowdown in global growth and trade tends to have an outsized impact on emerging markets and emerging market exposed areas of the UK stock market, including financials and miners, performed poorly as a consequence.

Although trade tensions continued to escalate during the quarter, the Japanese stock market ended September above its recent range to show a total return of 5.9% for the quarter.

Emerging markets equities lost value in what was a volatile third quarter, with US dollar strength and the US-China trade dispute weighing on risk appetite. The MSCI Emerging Markets index decreased in value and underperformed the MSCI World.  By contrast, Thailand recorded a strong gain and was the best performing index, with energy stocks among the strongest names. Mexico outperformed as the market rallied following general elections and an agreement with the US on NAFTA renegotiation. 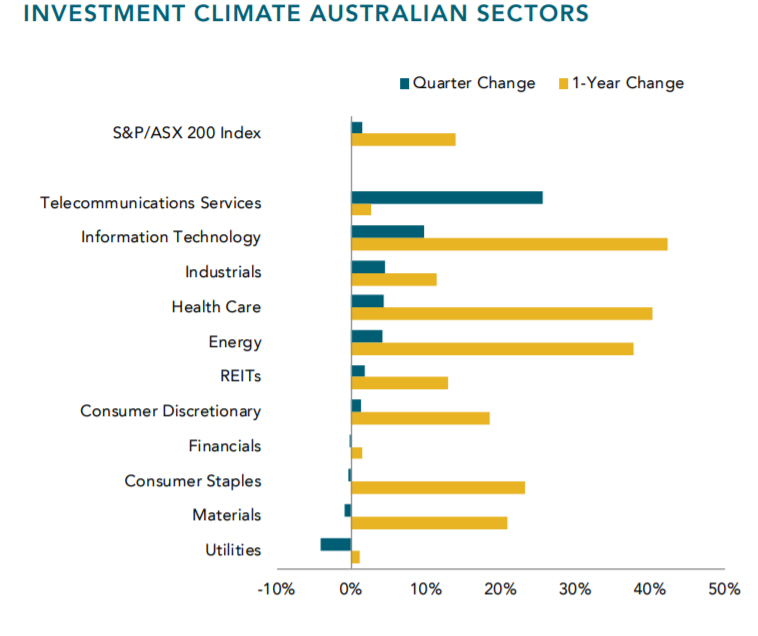 Australia’s performance was relatively good across the quarter given the attention focused on some of the ASX’s largest companies. The banking royal commission has been felt acutely by shareholders of Australia’s big four banks throughout 2018, though there was a mild recovery between the end of Q2 and the beginning of Q3.

Finally, not exactly related to investing or finances, however a story on why it’s always important to be aware of what you’re sharing online or with anyone who may call you fishing for information.

If haven’t heard of Strava, it’s a fitness network that allows you to track your cycling, running or swimming activities using GPS data. The users can upload the data from their activities, which includes distance traveled, pace, speed and elevation, along with heart rate. This allows the users to track and compare their data with that of other users. If you’re someone who is training alone it may provide an useful way to challenge yourself in your training. There are also challenges built into the system.

Of course whenever there’s data available, some nefarious party is liable to make something of it. At least that’s what UK cyclist Adam Jones thinks.

An Essex man who had £12,500 worth of bikes stolen from his home has warned cyclists to be careful of what they post on social media. Adam Jones believes thieves may try and identify riders who record fast times on Strava segments and he expressed regret that he had not been more cautious regarding the information he shared online.

It may be a leap to suggest he was targeted because he was posting fast times, but it seems he hadn’t been as vigilant with his privacy as he should. People often link accounts and for the determined thief, it’s likely a small effort to case out Strava, Facebook or Instagram and find a person with a picture of their expensive bike and then find out where they live. As for Strava, what can they say, but suggest users be more aware of what they’re sharing on social media.

“Strava hasn’t seen any verified cases of bicycle theft related to our platform. However, we encourage all of our members to be aware of what they share on all types of social media. Our platform has a suite of tools to help control what you share, including privacy zones, which will hide the start and end points of your activity if they fall within the zone.”

Of course this is nothing new, thieves have in the past used Facebook or the classifieds to hunt down things they wanted to steal, it’s always best not to leave a trail of breadcrumbs and make it easier for them.

Any information can be dangerous in the wrong hands, be careful what you’re putting out there!

With thanks to Schroders & DFA Australia

This material is provided for information only. No account has been taken of the objectives, financial situation or needs of any particular person or entity. Accordingly, to the extent that this material may constitute general financial product advice, investors should, before acting on the advice, consider the appropriateness of the advice, having regard to the investor’s objectives, financial situation and needs. This is not an offer or recommendation to buy or sell securities or other financial products, nor a solicitation for deposits or other business, whether directly or indirectly.