Evolving From Perfection to Success

This year’s US Open will be Serena Williams’ farewell from the game of tennis. A recent article in Vogue by Williams explained her thinking behind the decision. She wasn’t retiring as much as evolving to something else, she explained. She wanted to have more children and being 41, a professional tennis player, and a female, means “something’s got to give”. Williams was frustrated a guy wouldn’t be put in this position and hated the idea of retirement.

It’s an interesting contrast with another tennis great as they were nearing the end. Andre Agassi retired sixteen years ago at the same tournament, though with much different feelings about his retirement. Agassi, instead of hating the idea of an impending retirement, hated tennis and the end couldn’t come fast enough. Agassi detailed his last winning match (and the day leading up to it) in the first chapter of his autobiography: Open.

Agassi’s body, particularly his back, seemed to be a smouldering wreck at his retirement age of 36. Despite still playing, he said his body had already retired several months earlier. He’d been negotiating it out of retirement with cortisone shots into his back to dull the pain.

Of course, when we hear the concerns of multi-millionaire sportspeople we tend to think “champagne problems”, but in the case of Williams and Agassi there would be few sports or careers as immersive as tennis. This year’s ATP tour: 61 possible tournaments, 31 countries, 11 months of the year. There’s little middle ground. Despite the compensation for being the best, it’s a unique combination of mental and physical prowess that leads to success. And it starts from a young age, both Agassi and Williams had a racket in their hands since they could walk.

With the physical, mental and lifestyle commitments it’s either going to be a massive part of who you are and something you’ll desperately miss, like Serena, or a skin you’re desperate to shed and something you’re happy to walk away from, like Agassi. However, they didn’t just get to be the best, they had to recognise shortcomings and weaknesses, and address them.

Evolution is a concept we may all have to acquaint ourselves with at some time. Evolving the way we think, or the things we do, to accommodate changes in our lives and get better. In Agassi’s case, his father had driven him hard from a young age, training him relentlessly every day and expecting him to hit 2,500 perfect shots a day on a court constructed in the backyard of their home. Agassi was as resistant to this as a seven-year-old could be, but eventually his father’s perfectionism began to rub off.

The skill and coordination Agassi developed as a small child ensured he reached elite status, but the baggage of perfectionism eventually became a detriment to his game. Though he hated tennis, he felt a sense of calm from making the perfect shot. Of course, perfection is unattainable and what happens when you can’t always make the perfect shot?

Frustration, disappointment, loss of confidence and failure. Agassi’s frustration turned to berating himself and losing to less talented opponents. He was attempting to use his skill to win every point, instead of having a broader focus on winning the match. Agassi’s problems were in his head, and he had to start playing the odds, being steady and consistent, instead of perfect.

Fellow tennis pro Brad Gilbert explained this to Agassi one night at dinner in 1994. The next morning, Gilbert was Agassi’s coach.  Gilbert was known for making the most of limited abilities and winning the mental game of tennis. In making the shift from perfect to good, under Gilbert’s guidance, Agassi won six of his eight grand slam titles.

Serena wanted to be great and chased perfection too, but it came from a different place. It wasn’t the perfect shot; it was by improving through learning. Serena wasn’t good at an early age like Agassi. She was in the shadow of her big sister, Venus who was a better player. Serena didn’t get as many early opportunities as her sister, so she was left with time to sit in the stands and watch Venus play. Specifically, it gave her an opportunity to learn from any mistakes Venus made. If Venus lost a match a certain way, Serena made mental notes on where Venus went wrong.

The idea of being perfect is one many investors struggle with and it can lead to mistakes. Instead of learning, they return to make the same mistakes they and other investors have already made. Whether it be expecting to get amazing returns every year, focusing on the fund in their portfolio that’s not doing well, chasing the latest guru manager, trying to pick a market top, or sitting on their hands waiting for a market bottom they hope to perfectly time.

It’s important to learn there is no perfection when investing because to chase perfection usually means taking action and fiddling. Looking at someone else’s return and doing what they did. Dropping the fund that underperformed last year. Buying the fund that outperformed last year. Selling out on hearsay of the next predicted crash. Even sitting on a pile of cash waiting anxiously for the right moment is more action than simply just investing and forgetting about it. Waiting to act is essentially second guessing yourself every day.

As Gilbert told Agassi, trying to be perfect on each point means stacking the odds against yourself and chasing something that doesn’t exist. It’s why the average investor can’t keep up with the market, too much fiddling in the pursuit of perfection, and when you don’t achieve perfection it’s the vicious cycle of frustration and disappointment leading to taking action and fiddling. Something US investment research firm DALBAR shows us on an annual basis. The more investors attempt perfection, the less success they have. Others have tried being perfect and repeatedly failed. It’s important to learn the lesson. 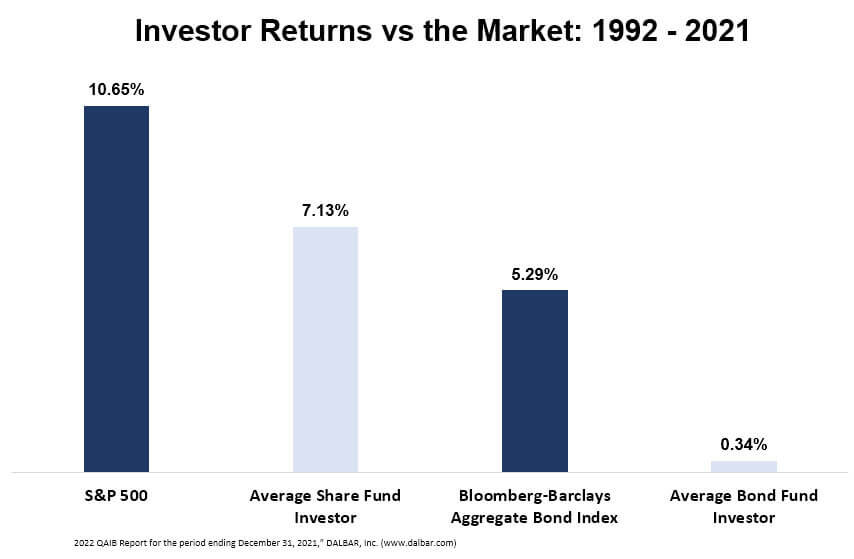 As far as perfection and trying to make things happen, how are these odds on what the market has done over the last 70 years?

Trying to make every shot perfect is a little like attempting to outsmart the market on short run time frames. You’d have as much success flipping a coin. As time goes on, the market does more of the work and lessens the need for fiddling. There’s always the potential for a negative return, but the passing of time narrows that likelihood. And if there was no chance of a negative return, there would be no risk, and without risk you can’t expect a return at all!

Agassi not letting the perfect be the enemy of the good played a large part in the success in the second half of his career, and Serena’s ability to learn from the mistakes of her sister propelled her to greatness. Both left them with a lot more resources for their evolution or retirement endeavours. Agassi is regarded as one of the most generous and philanthropic sportspeople of his generation, setting up programs and schools for underprivileged kids. Serena, also involved in charity, has started a venture capital firm providing funding to early-stage companies.

As Serena says, “mistakes are learning experiences”. For anyone who has been caught up chasing perfection and trying to make returns happen, the quicker you can learn that investment success is not about perfection, the quicker you’ll evolve to be a better investor.

Shared with permission of our licensee FYG Planners and friends at Mancell Group.