Genene Wilson
Fantasy sports have taken off over the past decade. Not deriving enough excitement from watching various sports, we now have to live vicariously through the stats of our favourite players.

In Australia, the big game is Supercoach. It’s free to play, it’s run by News Corp and promoted through their various capital city newspapers. In the southern states, the focus is AFL, while in the Northern states the focus is an NRL version.

Being from the south, we’ll keep the discussion to what we understand – the AFL version.

Why would this be of any interest to investors?

Simply, the game involves deciding on a strategy and then maintaining a lot of discipline though a 23-week season. Short term in comparison to the usual investment horizon, but there’s the ever-present temptation to fiddle with your strategy and team, based on short term results.

Sounds familiar, right? After a bad year or quarter some investors start looking around enviously at other options that delivered better returns. They then wonder why they didn’t have that fund, country or asset class in their portfolio. Then they chase that performance, only to see that fund, country or asset class not back it up. They’ve wasted a year, trading costs and given up tax advantages due to impatience.

Every supercoach entrant picks a team of 30 players at the beginning of the season. Players are categorised into four lines, defence, midfield, rucks and forwards. All teams begin with a $10 million salary cap to spend and during the season they have the ability to trade players 30 times, although trades are limited to a maximum of 2 trades per week.

Initial player prices are based on their scoring average from the previous season. For players not in the league last year, such as rookies, their price is calculated based on their draft position. So, the most expensive players have at least a one-year history of strong performance, while the rookies are unknowns, but inexpensive. The $10 million salary cap ensures no one can pick the 30 best players as player prices range from $100k to $700k.

The scores of 22 players count towards the team’s weekly score, with the other 8 players acting as emergencies in case of injury or omission. The price of players changes (like stock prices) on a weekly basis after round three, with their form (based on game stats) dictating whether players rise or fall in value.

The idea is to start with a core group of 10-12 premium players you expect to rely on season long and build upon them. As players such as rookies rise in value, teams trade them out and use the money to upgrade other players to increasing the number of premium players in their side. The intention is to eventually have the strongest possible team with the highest scoring potential.

Clearly there is a lot of luck, as injuries and form will always play a part. But with 30 players in a team and the ability to only make 2 trades per week, the initial structure of the team is quite important – as is having a little bit of belief in the structure you’ve started with. Trading out your premium players to chase the performance of other premium players can come back to bite, but that doesn’t stop people with itchy fingers making snap decisions.

Two of the top three players from last season were the ruckmen, Brodie Grundy of Collingwood and Max Gawn of Melbourne, with season averages of 130 and 127 respectively. And guess who were two of the biggest scoring disappointments in round 1 of the 2019 season? 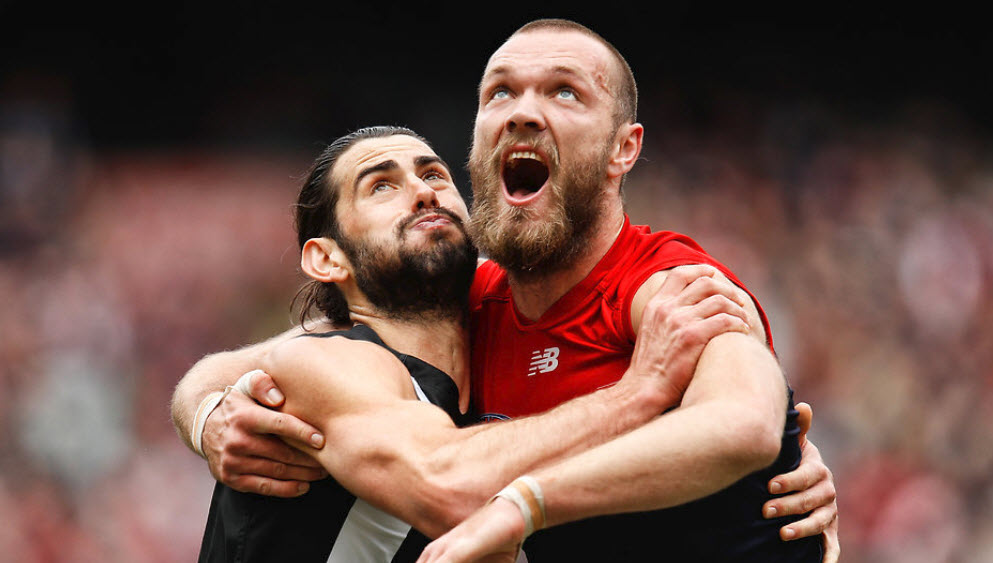 Brody Grundy and Max Gawn, who scored 81 and 87 respectively.

In round 2 both bounced back, Grundy scoring 137 and Gawn 116. The interesting thing was who many of these teams traded in to replace Grundy and Gawn – Port Adelaide’s Justin Westhoff.

Westhoff started off the year in a blaze of glory, scoring 149 in round 1, 4240 teams traded him into their teams based on that performance, yet in round two he burned all his new owners, only scoring 47!

Another bad knee jerk response was the post round one reaction to Melbourne’s Clayton Oliver. Oliver has been one of the most consistent performers over the past two seasons and according to supercoach points he was the seventh best player last year. He’s someone you definitely want in your midfield, but in round 1 he was disappointing scoring only 71, well below his 2018 average of 114.

In response, over 4000 entrants traded Oliver out. And what did Oliver do in round two? Scored a massive 141. Anyone who impulsively traded him out would likely be licking their wounds!

Before round 3 the impulsiveness continued. Over 20,000 entrants traded out Sydney’s Issac Heeney, who had only averaged 76 in the first two rounds. Well below his 2018 season average of 97.

You can guess what happened in round 3. Heeney bounced back, scoring 137!

There’s a reason why a significant number of supercoach teams become dormant towards the end of the season, they’ve traded too much and used up their 30 allocated trades. They can no longer cover unexpected injuries or omissions and in frustration they give up, unable to compete. At this point the entrants who were more judicious continue to improve their position as their disciplined behaviour pays off.

It’s not too dissimilar to the reason many investors fail to even achieve market returns – they’ve traded too much, chasing the next hot thing. Frustrated about their inability to keep up with the market, their portfolio is in a state of disrepair, unfulfilled they give up – ‘investing’ is not for them!

Whether the participants know it or not, both investing and fantasy sports are discipline related activities. It’s best to pick a strategy and stick to it because chasing performance ensures a drag on long term returns. The volatility eventually evens out, there’s little need to react to it in the short term.

Ensure your strategy is robust and then have the discipline to stick with it.