Goals of a Lone Wolf 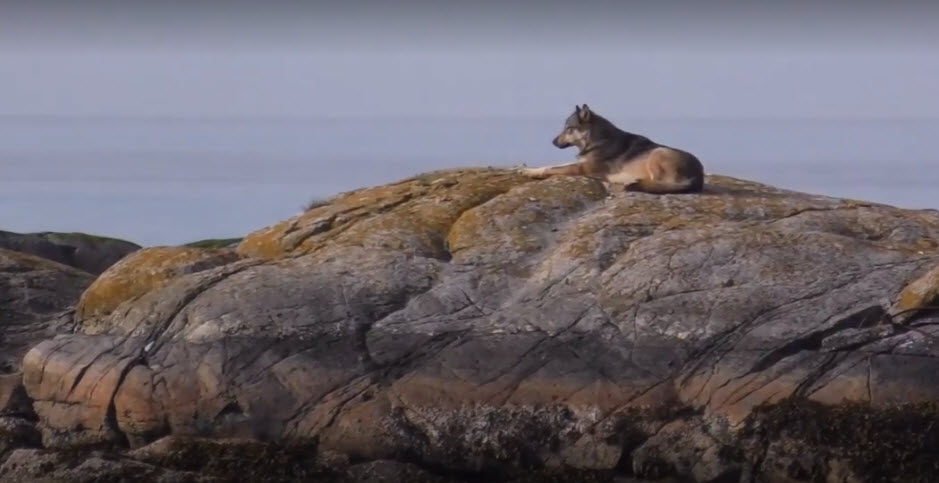 Campbell River is about 250km from Victoria on Vancouver Island in British Columbia. It’s a long walk. If you want to take the most direct route you need to swim more than a kilometre across the Saanich Inlet. Discovery Island is several kilometres off the coast from Victoria. It’s a long swim. Though it’s nothing for a determined wolf.

Takaya the wolf (as he’s been named) showed up on Discovery Island and its sister, Chatham Island, back in 2012. Both are small uninhabited islands. No one really knew what was going on or why Takaya ended up there. Wolves generally stay in packs and don’t claim their own private islands. Random sightings prior to his arrival, along with hair he’s left behind, suggest Takaya came from a pack known to frequent Campbell River on the coast of central Vancouver Island.

After Takaya’s arrival on Discovery and Chatham, he never left. Not that anyone noticed. He’s been observed swimming between small islands off the coast, but never returning to the big smoke. Back on Vancouver Island there is an abundance of deer and other types of prey to sustain a wolf. In contrast, on Discovery and Chatham, it’s a seafood diet. Fish, molluscs, seal and sea-lion.

Analysis of Takaya’s scat has shown 90% of his diet is seal and sea-lion. This isn’t a huge anomaly, there are wolves in British Columbia that make their life on the coast and marine life their prey. The anomaly here is Takaya abandoning or being rejected by a pack and taking up residence in an isolated environment and never going back. Wolves are pack animals. He’s never been joined by another wolf looking to mimic his lifestyle.

No People. No hunters. No cars. No danger from clashes with other wolves. No prospect of encountering equally dangerous animals, such as cougars or black bears. Whether he understood it or not, Takaya’s isolation has substantially lowered his risk in life.

There’s a good book on the reintroduction of wolves to Yellowstone National Park, called American Wolf: A True Story of Survival and Obsession in the West. It delves into the social behaviours of wolves and highlights how incredibly brutal life can be. The average lifespan for a wolf in the wild is 6-8 years. Takaya is already a senior citizen against those figures. Seven years in his current location.

Unbeknownst to Takaya, his biggest risk after taking up residence was whether humans would allow him to stay on the islands.

In the months after Takaya was seen in the islands, the park was closed while the BC Conservation staff made unsuccessful attempts to trap him. They feared negative encounters with Park visitors, or that the wolf would be unable to survive. Wolf experts predicted that he would not stay on the islands due to limited food and water and the small size of the wilderness territory. The total size of his territory is less than one square mile distributed among three larger islands and six smaller islands. The normal territory required for wolf survival is estimated as between 100 to 1000 square miles. Park authorities believed that he would not find enough to eat, as there are no ungulates or small mammals living on the islands (except mice).

It took a few years and an incident where Takaya followed a family who’d illegally brought a dog onto Discovery Island, but eventually BC Parks decided to leave him alone.

A story about a random lone wolf living a different life away from the pack may seem completely irrelevant to investing, but it’s very relevant to why we invest – goals. A lot of people have been anthropomorphising or attributing human characteristics to Takaya and speculating on what he needs in life.

“he’s living out there all alone, it must be lonely”

“hopefully a female wolf will make her way to join him”

We can’t know if wolves have goals, but at the risk of anthropomorphising Takaya ourselves, he seems completely happy living his ideal lifestyle. If we tie that back to investing, well it’s the whole point of investing! Setting aside what anyone else is doing and figuring out how to ensure money best serves you.

For some investors, goals and lifestyle are secondary considerations. They take a backseat to returns. If investors are overly focused on rates of return, they are liable to obsess over those rates of return. This then allows behaviour issues to creep in. They start chasing returns or trying to outperform others. There’s no guarantee it leads them to a better place.

Beating others and being competitive might be fun, but financial writer Nick Murray puts it best in his book Simple Wealth, Inevitable Wealth, where the focus should be when investing:

A portfolio is not, in and of itself, a plan. And a portfolio that isn’t in service to a plan is just a form of speculation; it can have no other goal than to beat most other people’s portfolios.

But “outperformance” isn’t a financial goal. An income you don’t outlive – to cite one critical example – is a financial goal. If your portfolio “outperforms” mine, such that I run out of money when I’m 76, and you don’t run out of money until you’re 82, it isn’t going to matter much when we’re both 85, sitting on a park bench without two nickels to rub together between us.

If we’re comparing our lives or our returns with others, they will never be enough. Inevitably, someone else will always be doing better. They may also have defined goals that their returns align with, making any comparison or competition redundant.

Takaya is living like no other wolf. He’s abandoned comparison and competition with others to the mystery of human experts. No one understands what his version of success or contentment is.

Takaya seems to know what he wants. He acts accordingly. Which is really what matters.