What effect do money worries have on our health?

One of the more disturbing aspects of the ongoing franking credits debate have been the reports of health troubles being suffered by affected retirees.

As noted by The Australian when reporting on a franking credits hearing:

Several speakers referred to the personal impact of the policy. “I recently had a heart attack,” said one man. “And when the doctor asked if I was under any stress, my wife immediately said ‘yes, Bill Shorten and franking credits’.’’

When it comes to our health there are various arguments about what’s good for us and what’s not. Much of it revolves around food and exercise. Only this week we’ve heard eggs are bad for us again, but if you don’t like that conclusion you can always wait until next month when differing research may be released!

What’s less contentious is role of financial stress in our lives. Hospital admissions have been shown to increase when the stockmarket is volatile, while a 2018 study found the rate of suicides increase in the year of a significant market decline, along with the following year. Given this information, it’s probably not a surprise the authors of the study found the 2008 financial crisis was a particularly grim time.

It appears that there were an additional 6,566 suicides across our sample nations in the 2008-09 period that were a direct consequence of the rapid decline of equity values.

Some of the more interesting research over the past few years on money woes and the ability to function is the impact of poverty and financial stress on brain function. A 2013 study done at Princeton University looked into how groups of people with pressing financial concerns performed on cognitive and logic tests.

“researchers found that pressing financial concerns had an immediate impact on the ability of low-income individuals to perform on common cognitive and logic tests. On average, a person preoccupied with money problems exhibited a drop in cognitive function similar to a 13-point dip in IQ, or the loss of an entire night’s sleep.”

Without preoccupation on financial issues it appears a person is much more clearheaded and able to make better decisions. It also seems somewhat evident that people feel good if they are in a better financial position. Though this may also have its drawbacks.

Believe us when we say no one calls up to discuss the markets and their portfolio concerns when the market is going up. In a discussion when the market is roaring investors are likely to want to allocate more money to the stock side of the portfolio. They may even question why they weren’t loaded up with a greater percentage of stocks over fixed interest – “I could have had even better returns!”

So we’re not always rational when we feel good, but under significant financial duress, a person’s decision making is definitely not likely to be optimal and their health and mental health possibly under strain. While the Princeton study was focused on functioning under the stress of poverty, investors often have trouble setting aside and controlling their feelings during a market fall, even if they’re in a position of comfort. The market decline becomes a significant preoccupation.

You may have heard the term ‘a successful investment experience’. We even authored a paper on achieving it. You could say the definition is up for interpretation depending on the investor and their goals, but you might imagine most investors want to achieve the returns that help them achieve their goals – specifically with the least amount of volatility. The big hurdle!

Those that are more prone to experience stress from their financial lives might go one step further and consider what is a healthy investment experience. Especially for their personality. Ponder the graphic for a moment. It’s a hypothetical of course, but imagine two different portfolios measured over the same time frame that achieve the same end result, with differing levels of volatility. 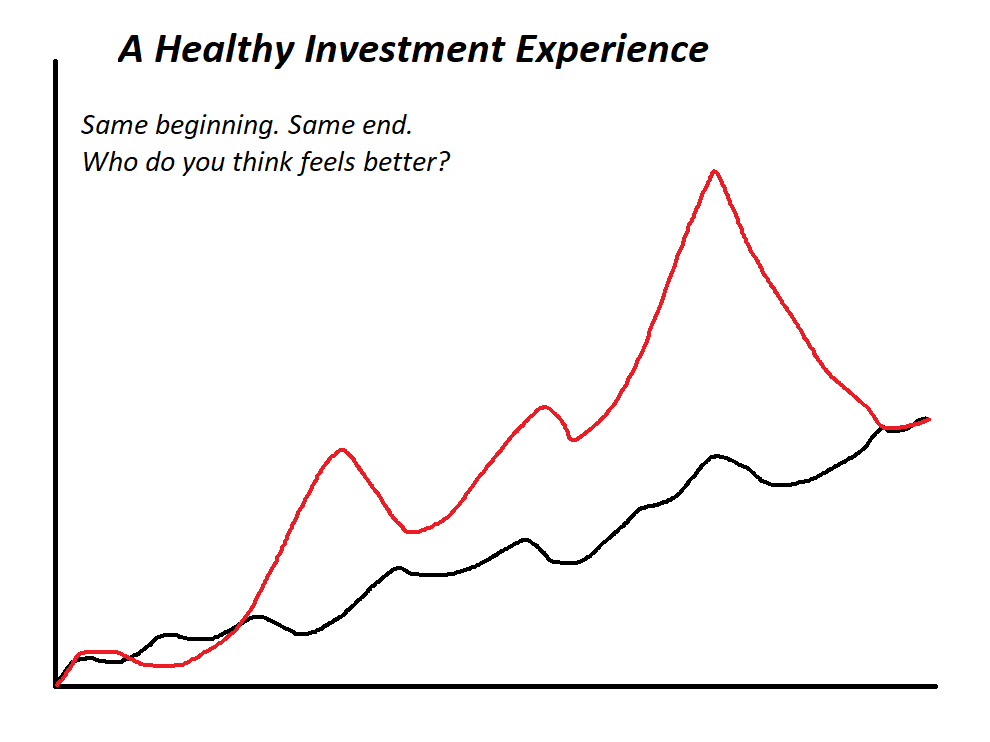 Imagine it’s your portfolio in the black against your stockpicking friend in the red. Despite achieving the same end result, in each case you would imagine you and your friend would have significantly different feelings towards your respective portfolios. You would also have differing opinions on whether the outcome to this point represents a successful investment experience.

Your friend might have ice-water coursing through their veins, but if not, how have they dealt with those portfolio drops? Health issues, stress, sleep problems or cognitive impairment? The potential to temporarily to lose IQ points isn’t something to be discounted. How might that affect work or other aspects of life? If it’s spilling over, it doesn’t seem like a healthy investment experience.

So how do you have a healthy investment experience? Goals are a good start. Then there’s a purpose. Some goals will require a higher amount of risk which subsequently will increase the variation in potential returns. This means volatility will need to be accepted along with the mindset to accommodate it, but if an investor can’t accommodate it, they need to consider their options.

Those options are a higher rate of saving, a lower rate of return and a longer timeframe to reach goals.

Advice helps too. Accepting risk and the potential for heightened stress during volatility may be acceptable if you have someone to guide you through the more challenging periods. Most corrections are temporary and crashes are rare. It’s tough to control how you feel in a particular moment, but some guidance to understand a short term issue is not necessarily a long term problem can help calm the nerves.

It’s important an investor can find the balance that doesn’t affect their health or ability to think clearly.

Thank you to my friends at FYG for this contribution. This represents general information only. Before making any financial or investment decisions, we recommend you consult a financial planner to take into account your personal investment objectives, financial situation and individual needs.