It’s been rough out there and fear is everywhere. What port will you shelter in a storm?

After starting off the quarter on a positive footing before going on a rally, markets have done the roundtrip and circled basically back to where they were in late June. Across the board, almost everything is feeling the heat this year. Every asset class is pricing in the end of cheap money.

In times like this there are a handful of options, but they eventually circle back to basically two choices or outcomes. Fear often determines which choice will be taken. Fear can be fear of missing out, or fear of more pain. Right now, it’s fear of more pain, CNN has a gauge of investor sentiment, and it currently looks like this: 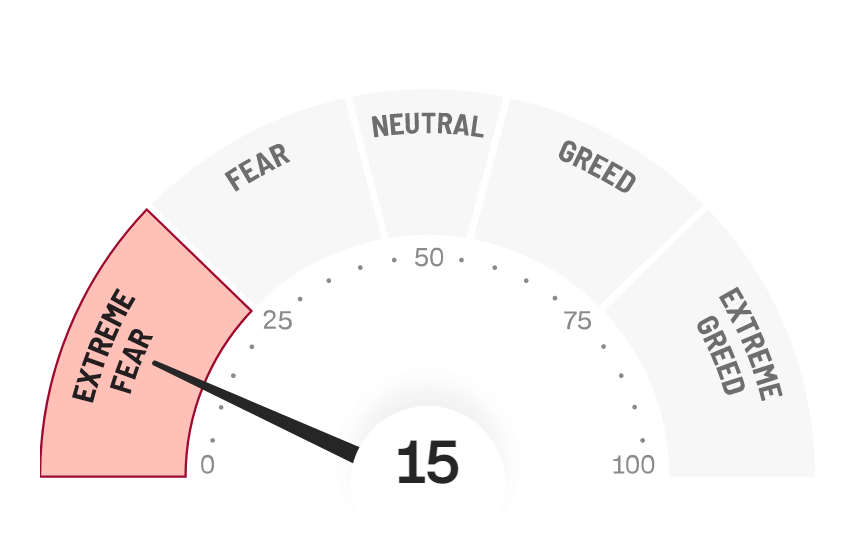 While market corrections and bear markets always get reversed, no one truly believes it when things are dark. The turnaround usually starts unexpectedly. At the point we’ve been thinking things can only get worse.

The liquid and diversified portfolio is not alone in having a torrid moment. Everything comes with its own risks, and many have reared their heads.

Real estate? We’ve turned homes into financial assets and now they’re performing like them. More volatile, but unfortunately, at higher prices, which makes the volatility more painful when any falls come. According to CoreLogic, since the RBA surprised everyone with a rate rise in May, the 5 city aggregate of Australian house prices has fallen 5.6%, with Sydney down 9%.

Why? A person or couple’s borrowing capacity remains a major influence on real estate prices. This example from Zenith Finance (assuming a 20% deposit) highlights how things changed from May to the August rate rise. Borrowing capacity would have deteriorated further with the September rate increase, along with any other increases to come. Current buyers don’t have the same ability to pay what buyers did when the cash rate was at 0.1%. If rates turn down again with an economic slowdown, it will alleviate some of the pressure, but those wild real estate gains in the year prior to May 2022 can mostly be attributed to the 0.1% cash rate.

What about the short stays?

People are on the streets. Investors are renting out residential properties like they’re a hotel. Governments are using purpose built tourism accommodation to house the homeless. Cockeyed doesn’t even begin describing it. Government talking about using tax dollars to build more social housing while Airbnb cannibalises the rental market is strange.

Councils are beginning to recognise the problem. Hobart City Council are tightening the screws on Airbnbs. Another council in Tasmania has already jacked up waste levies for short stays. One investor, who’d convinced himself that buying three properties in the same town and turning them into Airbnbs was shrewd, was not happy his lack of diversification caught him out. It may only be the beginning.

Precious metals? Generally, when markets sell off, we field some questions about gold. Those questions have been non-existent. Which says something, in rough times investors turn their attention to what’s going up. Gold isn’t. Despite being the widely acknowledged crisis “safe haven”, this time even gold has come up short. Off 15% over the past six months. Silver’s another one where there’s always hype in some corners of the internet that a boom isn’t far away. Apparently, the silver price is being perpetually “manipulated” by investment banks. Apart from an occasional spike here and there, the silver price hasn’t done much recently or long term.

Bitcoin, another one that was forecast to be a safe haven and a form of “digital gold”. It’s been in the doghouse since the US Federal Reserve started raising rates, down almost 60% and behaving more like a volatile tech stock than a safe haven. Bitcoin’s still higher than it was pre-pandemic, but it’s been behaving closer to a tech stock. Maybe in another fifty years when there’s more data, we’ll know exactly what bitcoin should be used for.

Cash, it went away for a while, but as rates creep up it’s looking seductive again. That’s if we ignore tax and the reason why rates are increasing: inflation, which means there’s still a negative real return like everything else that’s below the inflation rate. And there’s talk that if central bankers hike rates high enough, then recession follows, and rates are cut again to ease the pain. That’s great for all the risk assets investors jumped out of and not great for the cash they jumped into.

Back to financial markets, what do they do from here? We don’t know. Despite the fact we always discourage it and say it’s not possible, we have seen people successfully time markets. Of course, it only happens once because it’s luck, and luck plays with our minds because we think it’s skill. It feels great to see markets take a tumble after selling. Confirmation we were right! Might even get to talk about how prescient the decision was, but the clock’s ticking. To make a market timing exercise work we’ve got to be right twice. Imagine selling out in the days before Covid smashed the markets in 2020, only to sit out until markets recovered all their losses and then went higher. It’s how skill is exposed as luck.

This chart from 2009 highlights how we often get market timing wrong. As the market bottomed in March 2009, the number of AustralianSuper members switching to more conservative portfolio options spiked. They missed the recovery. 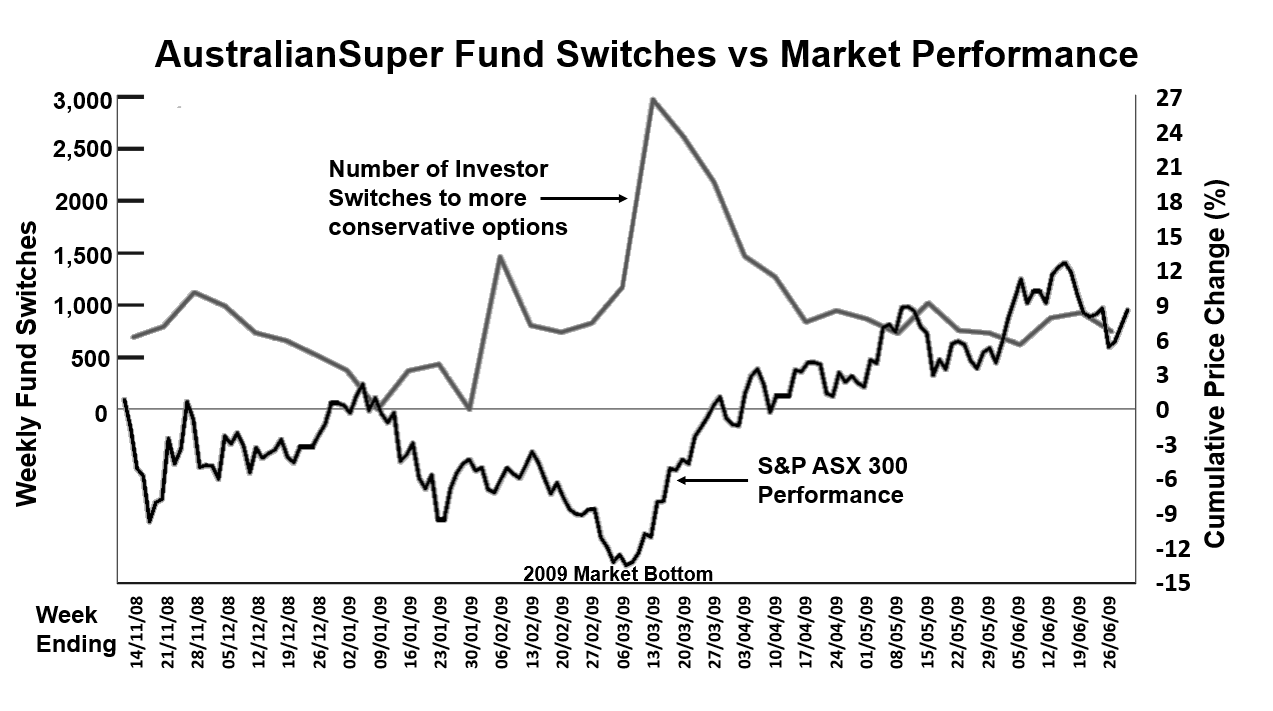 With most everything in the doldrums, the question is what now?

The two ultimate choices are act or don’t act. Act means trying to will something into changing.  Act means picking something different and hoping it may avoid further pain or recoup market losses, while hoping the market doesn’t turn and make the decision futile. Don’t act means sticking with our plan. Knowing that we don’t get 6, 7 or 8 per cent consistently every year. It’s something that’s targeted over a decade.

As we always say, returns are lumpy. They don’t come in a straight line and they’re not smooth because they’re often based on sentiment and expectations. Bad days or better days. Sentiment can change very quickly.

This represents general information only. Before making any financial or investment decisions, we recommend you consult a financial planner to take into account your personal investment objectives, financial situation and individual needs. Thank you to FYG Planners for this content.