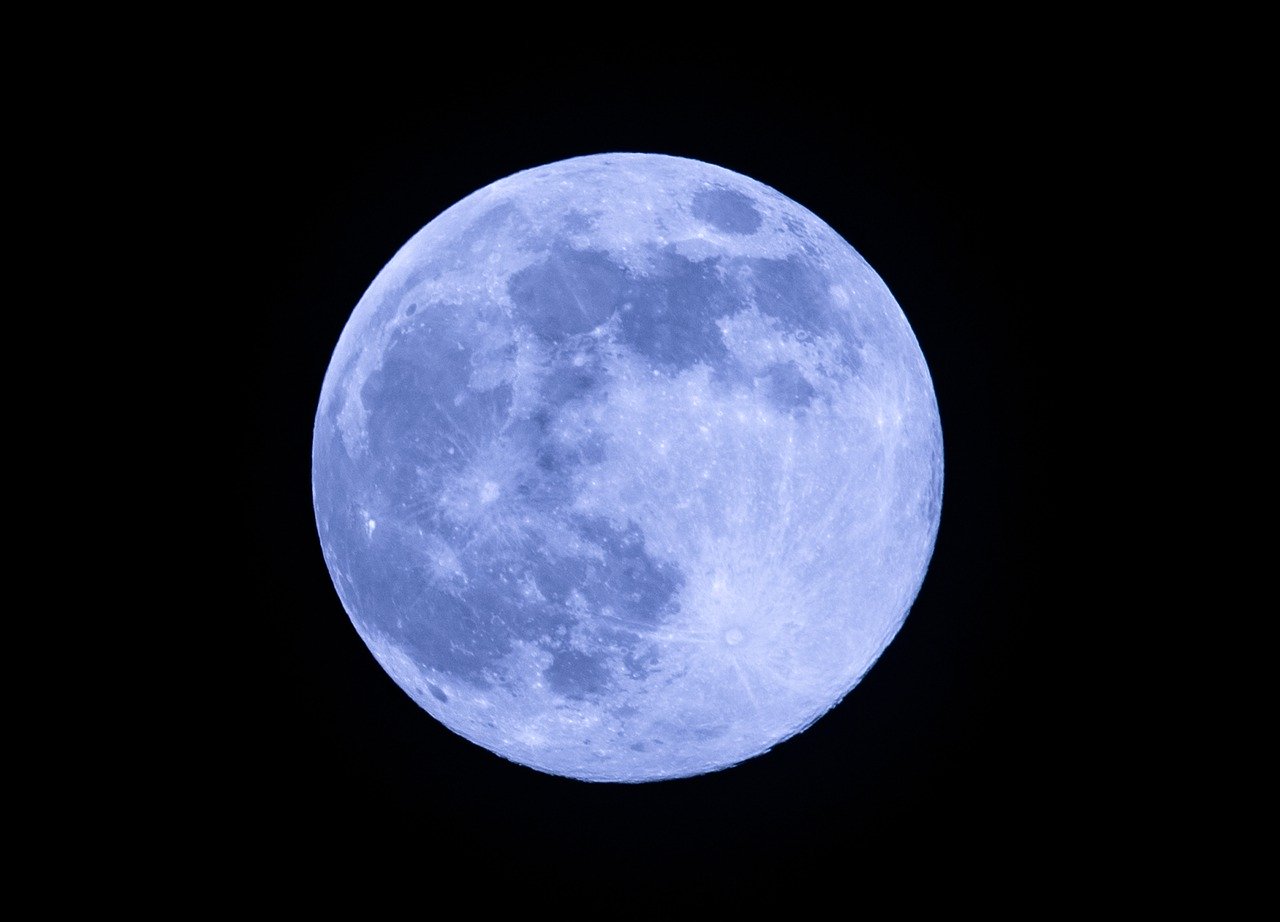 For the past few years there has been a battle raging. Certain superannuation funds have not been backward about coming forward about their performance. Their ‘balanced’ options are the headline generators. Take out top spot and it’s plenty of media attention. The fund’s chief investment officer can pose for flattering photos. Even better, they’ll be quoted on market direction and what they see as emerging investment themes. This attention will attract new investors. People switching their super to the winner.

For some, the term ‘balanced’ is misleading. True defensive assets are fixed interest (bonds) and cash. Some superfunds have snuck various other assets into the defensive column. Real estate. Infrastructure. Increasing their holdings of unlisted assets  Some even boasted of holding no cash or fixed interest.

Australia’s best-performing pension fund is going against the grain by avoiding cash and bonds, betting the 30-year investment horizon of its youthful members means it can ride out looming economic shocks. HostPlus Pty, which represents swathes of the country’s baristas and restaurant waiters, has about 53 percent of its A$40 billion ($28 billion) in equities and the remainder in unlisted assets including airports and water-cleaning plants, said Chief Investment Officer Sam Sicilia.

This discussion received a little attention in the media. There was a problem. Those crying wolf were financial advisers or retail funds. Due to a poor industry reputation and the recent banking royal commission, who’d listen? They weren’t regarded as sympathetic or trustworthy actors. In turn, the risks of these mislabeled, incredibly aggressive superfunds, choc full of unlisted assets, mostly went unnoticed.

Until a few months ago when a perfect storm formed.

Take one of the more vocal superfunds, Hostplus. Their chief investment officer Sam Sicilia argued on social media the balanced debate was a nonsense. As noted above, he boasted about holding no cash or fixed interest. Suggested his fund’s demographics afforded him the ability to take greater risks.

Hostplus ran into a problem. The government opened up superannuation to two $10,000 withdrawals. Their member base is drawn from industries hit hard by current closures. They have unlisted assets in their fund that are likely sitting above market value, despite one small revaluation.

With ATO already processing superannuation withdrawals, the members withdrawing may be enjoying overvalued redemption. This shifts the cost onto members left in the fund. In the event of a more realistic revaluation, those members take a bigger hit.

Who is most likely not withdrawing money right now? Possibly older members. Given Hostplus admits it tailors its asset allocation for younger members You don’t want to be in this fund if you are older. You might be wearing the bulk of any write downs.

This has precedence. No matter how many times managers say the risks don’t apply. They always do. Superfund MTAA had outstanding performance leading up to the 2008 financial crisis. It was then was taken to the woodshed. The fund only had 4% of its holdings in defensive assets like cash or fixed interest. It had large allocations to unlisted assets. While the sharemarket recovered, it was still seeing losses for several years on its unlisted assets. Its performance suffered significantly.

Disregard what superfund marketers say. Understand what you’re holding. Understand the risks associated with holding it. Understand why a fund invests the way it does. It is vitally important.

The Future Fund. It exists to meet unfunded commonwealth superannuation liabilities. It’s not exactly a superannuation fund, but something the government can draw upon if required. From this year the government can draw from the fund. Instead, it has indicated it will likely wait until 2026-27 until making any withdrawals. Allowing it to grow further.

The Future Fund released its March quarter portfolio update this week. Amidst all the chaos it only lost 3.4% for the quarter. It also holds a reasonable amount of unlisted assets, including holdings in various airports. Also, some high yield debt, some of which might be suspect right now. The future fund only revalues its unlisted assets once a year. On June 30.

In the release, Costello suggested a 7.5% decline in unlisted assets would move the fund’s performance from -0.2% to -3.5% financial year to date. He neglected to highlight the impact a 7.5% decline would have on the fund for the quarter.

Any cynical observer would categorise this as more fantasy land stuff. Real estate, infrastructure and private equity are all under real stress. Listed equivalents of the first two have seen double digit declines. Did anyone in the media ask a question about this hypothetical revaluation? Nope. No scrutiny. Might we suggest Peter Costello’s position protects the fund from any further questions?

The Future Fund has previously put out material that is questionable, yet attracts few questions. This scatterplot from December 2019 has the Future Fund trumpeting its returns being achieved with less risk (volatility) than nearly all categories of superannuation funds. 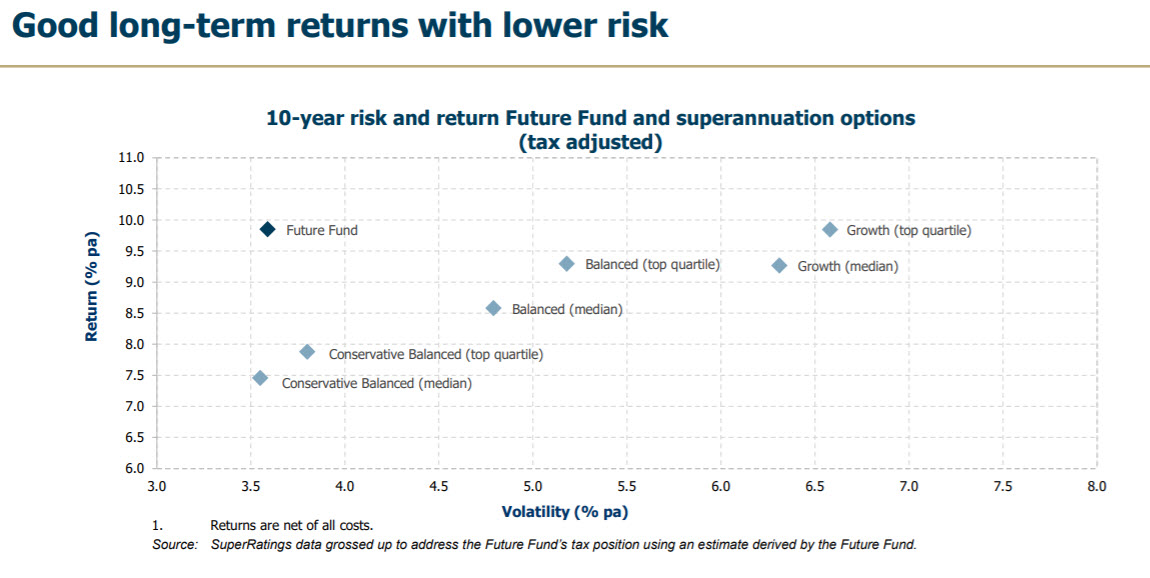 Why are we highlighting it? Truly, it’s not a big issue. The Future Fund is not a publicly available fund. Unfortunately, these slights of hand are part of investing. It’s better that investors are aware this goes on. The media will be selective on who they praise or bash. Myth-making is the order of the day. Egos need massaging. Someone will always be claiming they’re doing better by taking less risk. It’s never the case.

Unless highlighted, the uninitiated won’t know any better.