The biggest risk isn’t losing money, it’s running out of it

It was time to get some financial advice. You were over 60 and you didn’t think about this earlier. You were never going to be 60, right? That happened to other people. Your joints weren’t going to creak, the weight wouldn’t creep up on you, you wouldn’t need look to sideways in the toiletries aisle before quietly throwing the box of hair dye in your cart.

You sat across the table from your potential financial adviser. They said all the right things; their pot plants look watered and their office didn’t smell bad.

All positives. The real positive though, was the investment philosophy. There was no guess work. The data had been crunched, it showed where returns came from. You just had to believe in capitalism. If that stopped working, we’d all be done for. The portfolio would be constructed according to your needs. You’d be diversified, but there would be some risk.

Yes, that’s a downside. According to the documents, the worst year your portfolio delivered in the past couple of decades was negative 7.6%. Not ideal, but the best year was 26%. Pretty enticing, eh? It’s never good to look at the best-case scenario and start writing cheques, but the average annual return was still in the high single figures.

However, things don’t always go to plan. See this is 2007. December 2007. For the next year people will say capitalism is going to stop working. The worst yearly return your portfolio will experience in recent memory is about to happen. It will be beyond that negative 7.6% for a 50/50 portfolio. This portfolio hit will be negative 16.03%.

It’s well and good to talk about returns from x-date to y-date or “had you been invested for the last 25 years…” etc etc, but sometimes that’s not real life. You might pick the absolute worst start date for retirement and you need to spend money. This stuff is rattling around the average investor’s head right now. Increased market volatility, declining markets and how this will hurt their portfolio?

This raises important questions like, “am I going to have enough?” and “should I get out before anything else happens?” There are no answers about what will happen next because no one knows the future. If you want the worst thing that can happen next, you can use the guidepost of that worst year. It doesn’t provide the comfort that a bad start will be quickly erased, but it is instructional to see what happens if you panic.

Using the assumption someone is retiring with $750,000 of capital and wants to spend $4000 a month, we’ll drop them into a retirement beginning in December 2007. As noted, would be the worst first year of markets a retiree could experience in the last 25 years.

The third portfolio in grey is a “what if?”. In this what if, the investor begins their retirement with the blue portfolio. After 12 months of falling markets they decide in December 2008 that if this sell off continues, by next December 2009 they may not have any funds left to buy the grandchildren Christmas presents. They sell out to sit in the safety of cash from that point. 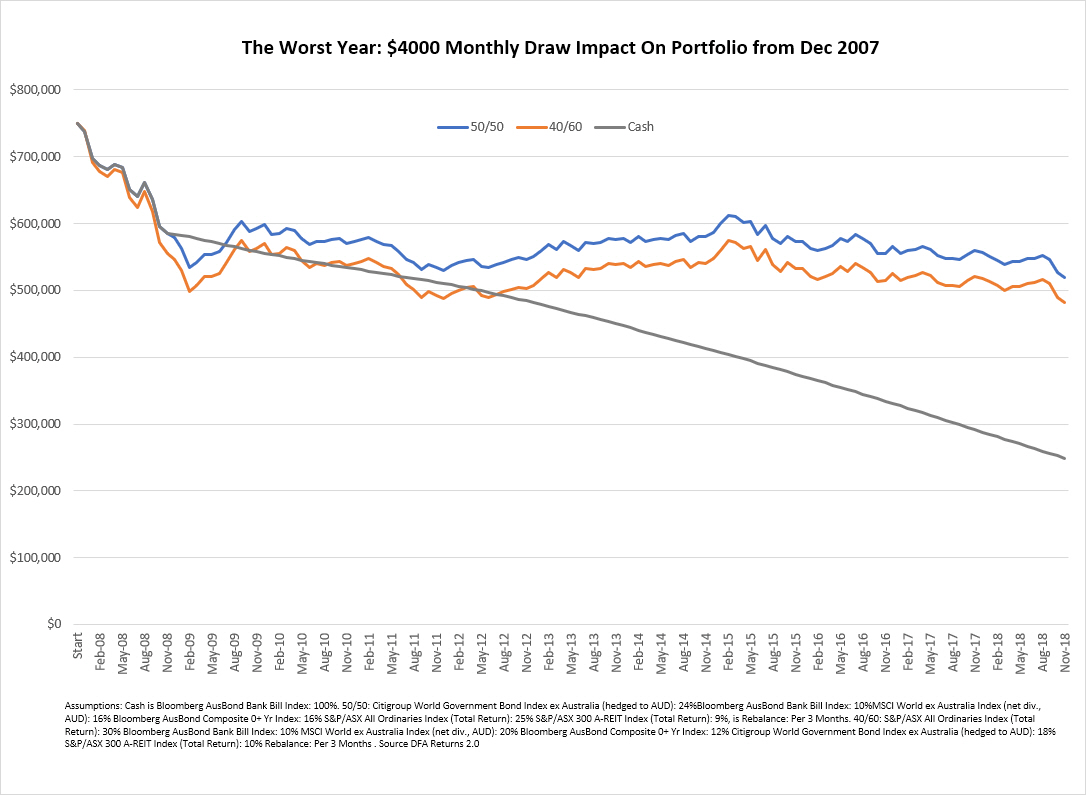 For a new investor, this is always a very real possibility. Imagine walking into the worst possible market with little experience and at the beginning of retirement! Mentally it would be extremely hard to deal with. You can hear all the rational reasons from your adviser about staying the course, but it’s hard to control how you feel. Hundreds of thousands of investors around the world bailed to cash during the financial crisis, forever spooked out of returning. They were told capitalism was done!

However, as you’ll note, being spooked out of markets came with a cost. Over this 11-year period all three portfolios drew the same amount in monthly income payments, which in total was $528,000, but the end portfolio values are markedly different.

Jumping to cash looked to be a smart option for a short period of time as markets continued to fall, but without any capital growth there would be no arresting the terminal decline the cash option would fall into.

There are only two options with this cash portfolio: hope and thrift. Hope interest rates miraculously skyrocket into double digits, or drastically cut income payments by about 85% to arrest the portfolio decline.

Absent either of these two occurrences, the ‘jump to cash’ portfolio will be drawn to zero inside six years.

Of course, there is no certainty with the other two portfolios. They aren’t absent the potential of large falls, as the first 15 months of their existence shows. Nor are they absent of volatility, as their monthly return chart shows. Meanwhile, the grey bars of cash are remarkably consistent. 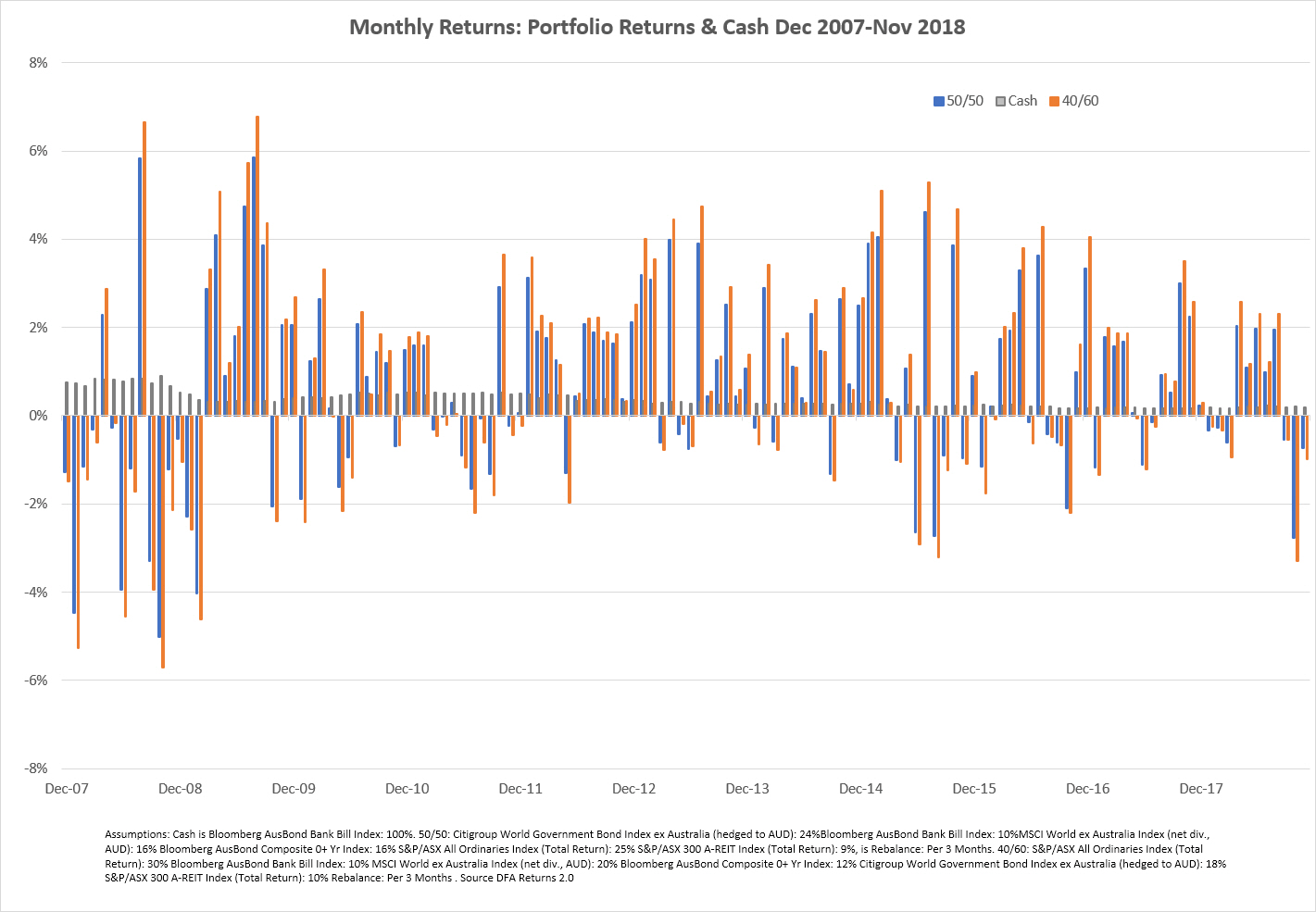 There’s no consistency for the other portfolios because they’re partly constructed from assets that compensate the investor for the risks they take. The investor will also be punished on occasion for that risk. There’s no market punishment for switching to cash, but there’s also not enough compensation if you’re looking for long-term income generation from your money. That’s the long term punishment.

December 2007 is hopefully the worst start to retirement anyone will ever see. The key takeaway? That poor start and the associated loss wasn’t fatal – unless the investor panicked and changed their strategy.

Remember, the biggest risk isn’t losing money, it’s running out of it.

Thanks to my friends at FYG Planners for the copy.

2 Responses to The biggest risk isn’t losing money, it’s running out of it