Every investor will face a conundrum at some point: what to do when their beliefs don’t work. Sometimes it’s an assumption that becomes lore. A favoured company paid a dividend for 20 straight years. Of course, it’s not going to ever stop paying a dividend… then it stops paying a dividend. A dagger to the heart! An outrage, there were plans for that money!

An assumption gone wrong. Yet of all the things that can go wrong with an individual share holding, it’s probably a minor one.

Sometimes it’s evidence. Academic research has shown certain companies have historically compensated investors with better returns for the extra risk taken. Decades of research measured against the general market and other categories of companies. Over long periods of time, value companies have been shown to outperform, but sometimes they don’t.

What are value companies? Value, as the name suggests, indicates something is under-priced. In this instance, shares, and they’re under-priced because they are generally out of favour for one reason or another.

Some people may use the dollar store analogy, but junk is cheap because it is junk. It’s not exact, but maybe it’s more akin to the discount bin at the bookstore. The books have been picked over; readers have moved onto the next hot best seller. There might be a little bit of physical damage you wouldn’t pay full price for, but you’re not paying the headline price on the book. There’s the potential upside of all that information and entertainment at a discount.

In the current environment, think about a company significantly disrupted due to COVID. The share price of the company has been pummeled, but they still have valuable assets on the balance sheet, and they are trading below what they are assumed to be worth. They should (hopefully) recover when life returns to normal. Investors are offered a deep discount with a potential higher level of profitability in the future.

Back to your portfolio. Because value shares are beaten down, there’s a bit more risk there. So higher risk means the potential for higher expected returns. That’s how your portfolio can do a little bit better than the market. Rather than guessing about the next hot company or sector, you tilt towards a section of companies whose market cap is lower than their actual valuation. Historically, when value companies have performed, they have performed extremely well and rewarded investors for the risk taken.

How have they done lately? They haven’t done so great against growth or the major market indices. Now what are growth companies? Basically, a business that is expected to grow its earnings above the rate of the market or economy. Investors may pay more because they expect the growth to continue at a strong rate. Take Tesla, it is now worth more than the 12 major global car makers combined while selling 1% of the units of the others. Is it overvalued? Not for us to say. If it can keep increasing earnings, investors may keep paying up.

For this exercise we’re using US examples because we have longer historical data sets. 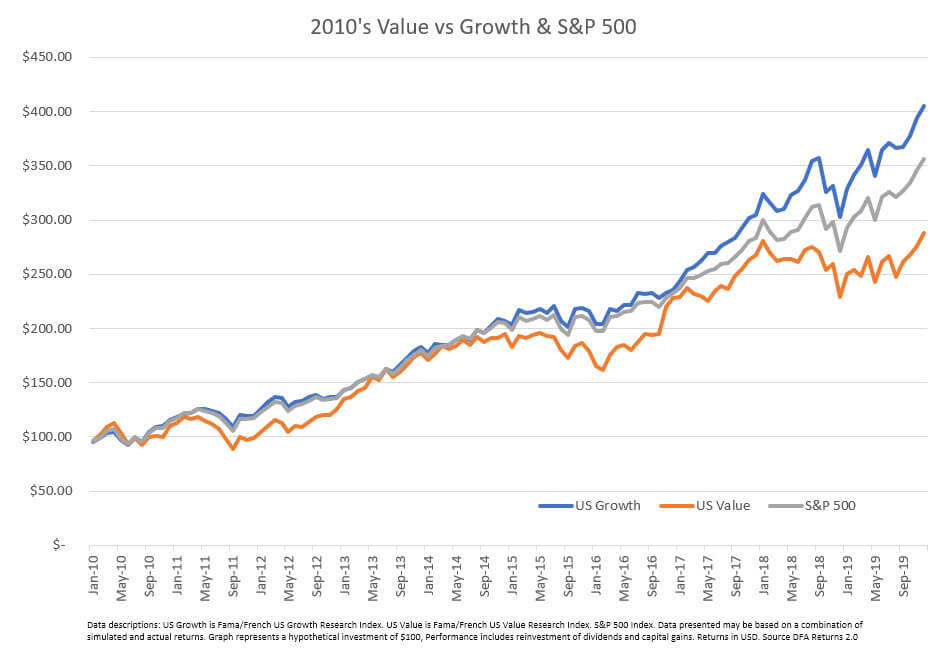 Gee that’s bad, you might say, why wouldn’t I just want to be in growth or the major indexes?

With data going back almost a century, we can look at how value has compared to growth over different time frames. If we take the 1930’s as an example, it wasn’t the best time for investing at all. If you had $100 bucks to invest in January 1930 and saw any return by December 1939, you could feel thankful. Remember, it was the great depression! If you could have invested in growth back then, you would have an annualised 1.72% return for the decade. The returns were negative for the S&P 500 at -0.05% annualised and -3.19% for value companies. 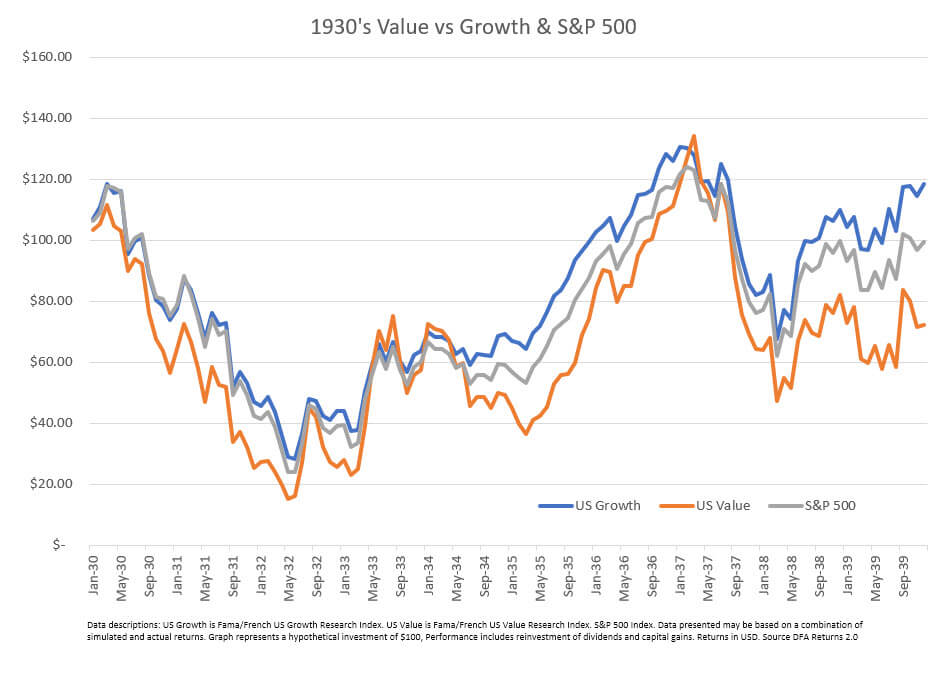 Exactly, but this is the reason you don’t make value your whole portfolio. It is a risk factor and may not always be present. The risk is your returns may be poor from time to time.

If you’re prepared to ride out the bad times, things can change. If we add in the expansionary period of the 1940’s, value presents a different picture. Value exposure would have dragged a portfolio higher as growth companies or the S&P 500 lagged. It also atoned for its abysmal performance in the 1930’s. 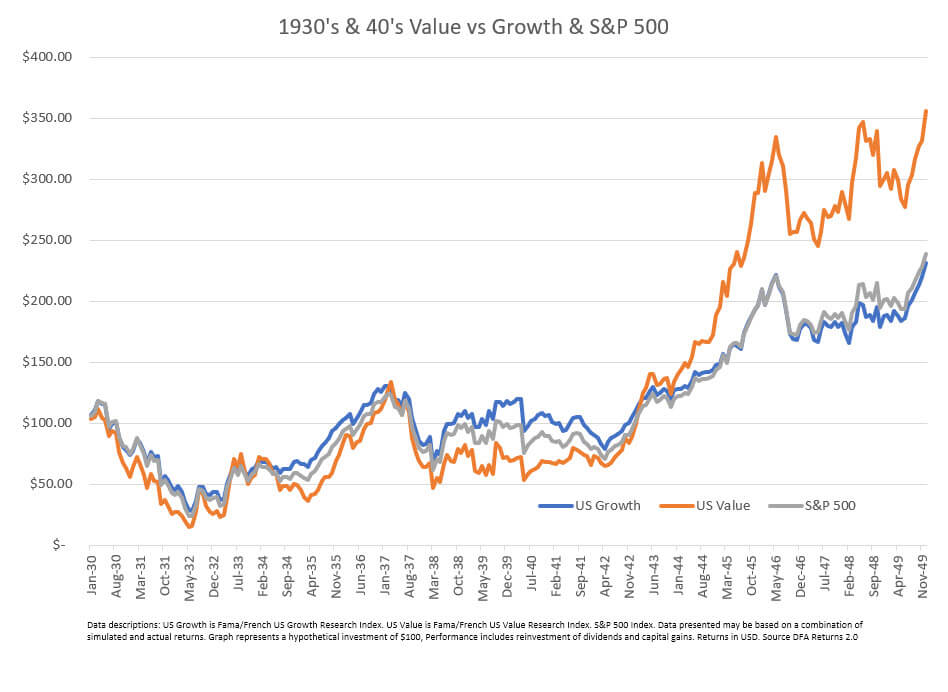 If we look across the decades since the 1930’s, the value premium is obvious. It shows up as outperformance in six of the nine decades. Across the whole-time frame, it’s almost a 3% annualised improvement in returns above the market over 90 years.

And yes, if we are using decades, we are using arbitrary measurements and within each decade there are time periods where the value premium lags. However, that’s the whole point, you need to be prepared to hold, so when the rewards arrive, as an investor, you are there to collect them.

Occasionally, like the 1930’s, the 1990’s and the 2010’s value’s outperformance will prove elusive, but the strong research behind the headline number leaves us as believers in the value premium.

Will it show up in the decade ahead? After a period of underperformance, it’s a question that will be asked. We’re unsure and we don’t attempt to predict the future, but we do wake up every morning knowing it has the potential to rear its head. When that time comes, having a diversified value fund or ETF as part of a portfolio should prove fruitful.

All available evidence has shown it to be the case.

This represents general information only. Before making any financial or investment decisions, we recommend you consult a financial planner to take into account your personal investment objectives, financial situation and individual needs. With thanks to my colleagues at FYG Planners for their insight.