What Does it Take to Get a Decent Return?

We’ve all seen them. The charts that show here’s what happened over the last ten, twenty, thirty years. January to December. It’s often used as the greatest message there is to stay the course, focus on the long term, it will all work out, etc etc… but occasionally you might think to yourself “it’s very specific”.

Of course a small sliver of people will inevitably be investing on the first trading day of the year with the money they found in their Christmas stocking. It’s much more likely an investor will commit their money on one of the other 250 or so trading days of the year. Which means it’s inside the investor’s own account that they get the true picture of how they’re travelling.

That leaves a big gap between the very general and the very specific. Those long run growth charts are illustrative, but they’re also blunt. There’s no range of outcomes. You get point A and point B, but that won’t be the future. The future presents many possibilities, meaning a range of potential outcomes. We can’t see the future, but we can at least be armed with the knowledge of everything that has occurred previously.

Just as there’s a return from January to December, there is a return from February to January and March to February, and so on. You add a month on and drop a month off on either side and you have a different annual return. You can extend this out for five, ten, twenty, thirty-year periods, as long as there is the data to do it. Across most markets data is limited at 30 years and beyond.

What does every available 30-year per annum return on the S&P 500 look like? 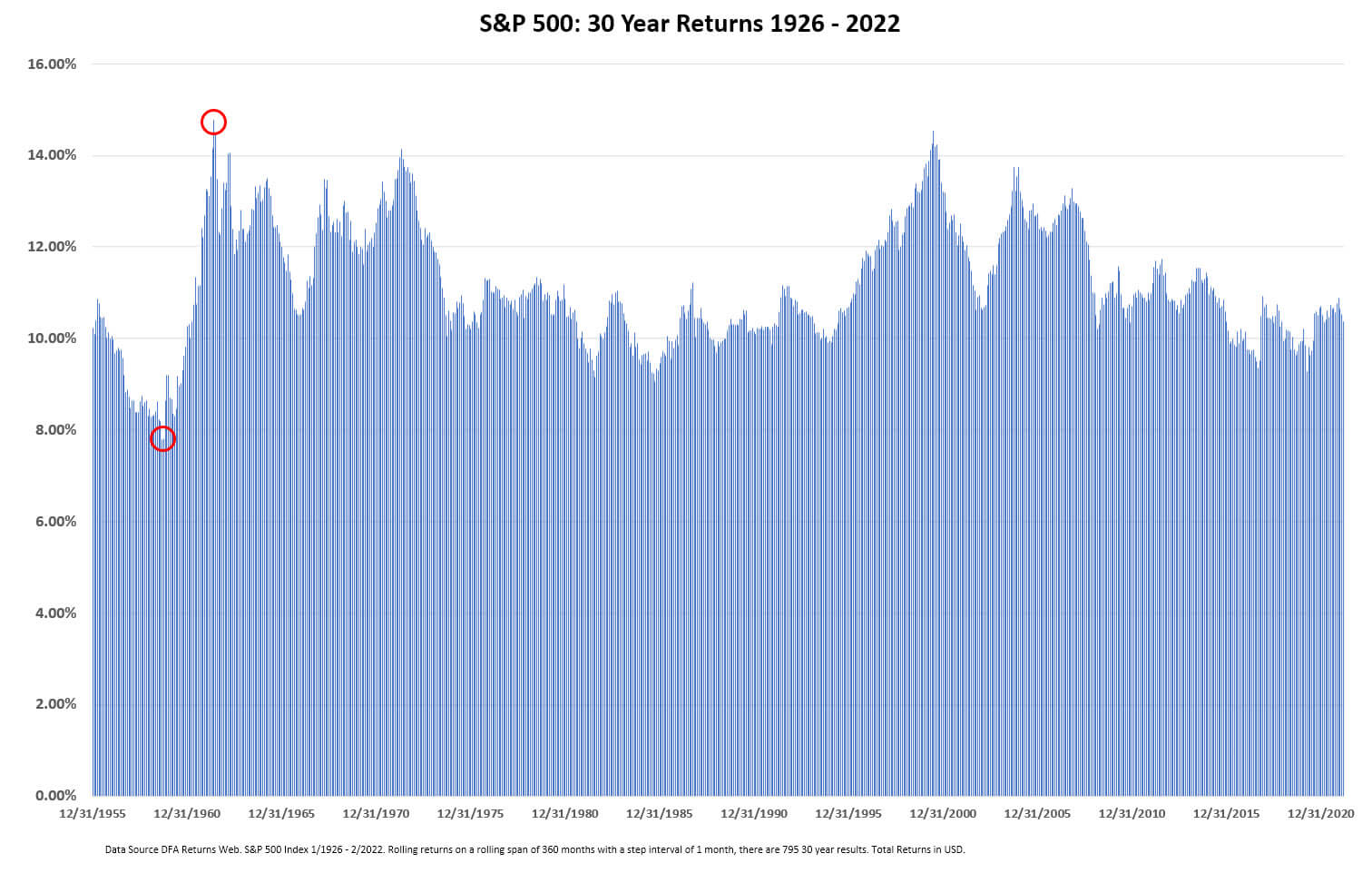 The first thing that’s obvious: there are no negative 30-year returns. Presupposing there was an investible S&P 500 index fund across the whole time period, then the worst return an investor would have wound up with was 7.80% pa (circled with red on the left). That 30-year period began in September 1929 and ended in August 1959. There were only two 30-year periods under 8% pa across the whole data set and they were consecutive time periods. The other, starting October 1929, saw a 7.81% pa return.

What’s the significance? Both ran headfirst into the 1929 sharemarket crash, which was followed by the great depression. To achieve the 7.8% pa return, which turned $1 into $9.51 over that 30 years, an investor had to initially withstand an 83% loss of their capital in the first 33 months. We preach discipline, but admittedly that’s a cast iron will!

The other red circle at the top tells another story and it’s linked with that 33 months. It’s the best 30-year return. This was 14.78% pa and it began just as the 33 months beginning September 1929 ended.

There are many lessons one might draw from this. Discipline certainly is important, and someone might argue it can see you through something as extreme as the great depression, but how does an investor withstand an 83% loss? Possibly it’s simply by forgetting they even invested in the first place! Another lesson, this is a single market index of 500 stocks, the short run pain experienced would be at the extreme level as any investor worth their salt would invest much more broadly across multiple asset classes. Then there’s the 33-month lesson, an investor requires the courage to enter the market after such a significant rout which leads to the best return. This prompts the reminder that stocks become less risky as they fall, not more.

Rolling returns are also useful to gather information over shorter periods. We’ve combined 1 year, 5 years and 10 years, along with 30 years shown. We can’t squeeze them all into one chart, but they all exist somewhere on the following chart between the best and worst returns.

You might call this chart the funnel of uncertainty. Anything between the best and the worst return has happened across those time periods. The average of all returns runs through the middle. It tells a story about certainty. Over the short run there’s none and there are a wide variety of potential outcomes. Over the long term the range of potential outcomes narrows. 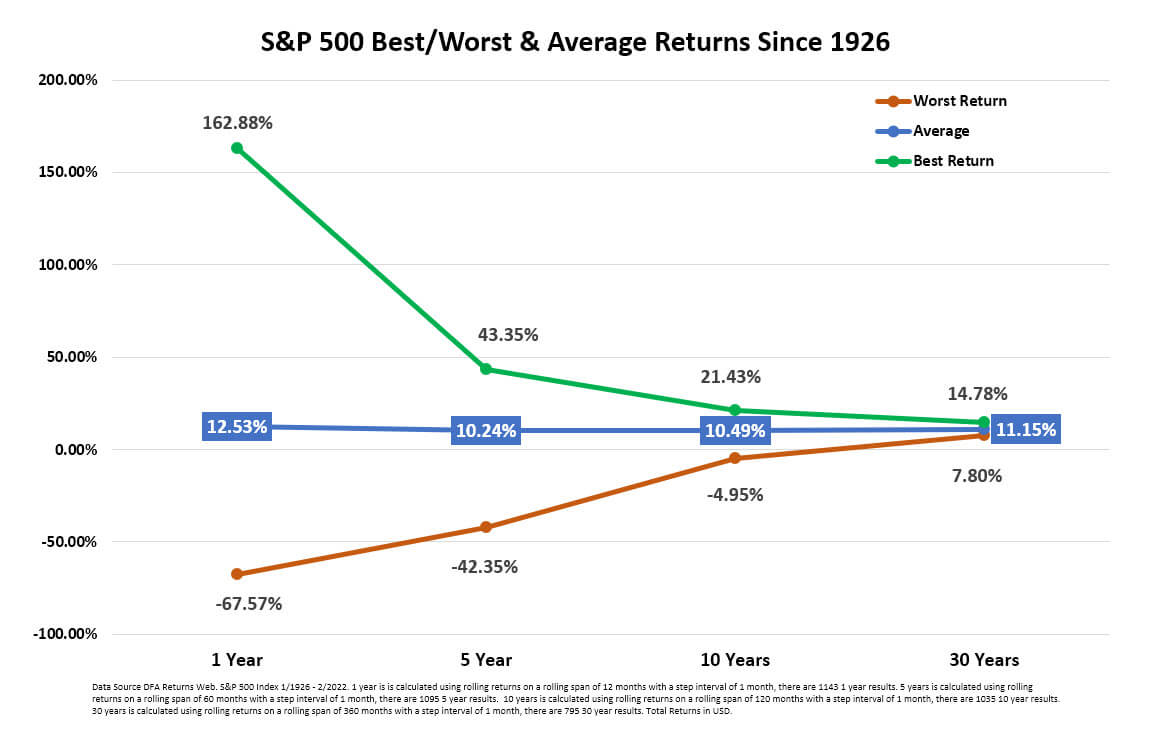 Potential outcomes narrowing with time underlines what the long term really is. It’s not 5 years, it’s not 10 years, in reality it’s 30 years. The issue for investors is it’s tough to put 30 years in perspective. If you’re aged 30 you become 60, if you’re 60 you become 90, if you’re 90, well, on a long enough timeline growth is not really a matter of importance. The funnel of uncertainty does begin to address the question of “what can I reasonably expect to happen over any timeframe?”

What does it take to get a decent return? Historically, time has been a very important element.

Shared with permission of our licensee FYG Planners and friends at Mancell Group.